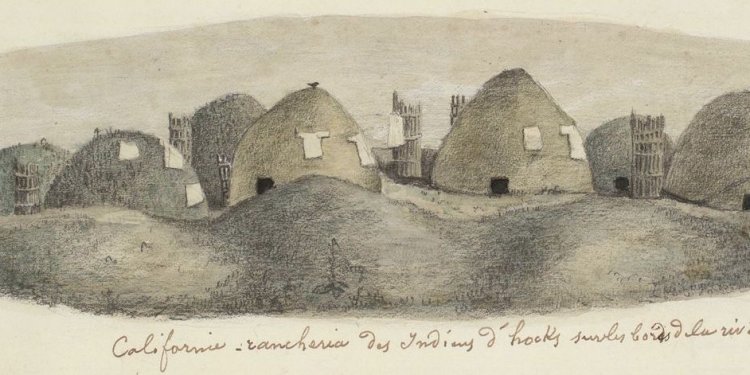 
Next: Spanish California || Previous: The Name and the Geography
Table of Contents

The Spaniards, of course, were hardly the first to discover this land of wonder and extremes. The earliest Californians were adventurous Asians who made their way across the Bering Straits to Alaska thousands of years ago when a warmer climate and a now-vanished land bridge made such travel easier. These men and women and their descendants settled North and South America, spreading out to form the various nations and tribes whom the first European visitors to this hemisphere dubbed "Indians." The mountain ranges of the Pacific Coast isolated these early settlers from the cultures that developed in neighboring Mexico and the western United States. Thus, the early population of California bore little physical resemblance to the Native Americans of the Great Plains and apparently shared no ties of language or culture with these nations. California's rugged topography, marked by mountain ranges and deserts, made it difficult for her indigenous groups to travel great distances, and the region's native peoples were even isolated from each other, tending to live in large family groups or clans with little political structure, unlike the larger tribes and nations to the east. As European settlement came late to California, her natives were also denied access to the newcomers' horses, whose runaways fathered the wild herds that gave Great Plains tribes new mobility as early as the sixteenth century. Thus divided and isolated, the original Californians were a diverse population, separated by language into as many as 135 distinct dialects. Tribes included the Karok, Maidu, Cahuilleno, Mojave, Yokuts, Pomo, Paiute, and Modoc. On the other hand, the mountains that divided the groups made extensive warfare impractical, and the California tribes and clans enjoyed a comparatively peaceful life.

The region's lack of rain during the growing season meant that agriculture was not a practical means of livelihood for early Californians, but the gentle climate and rich soil enabled these groups to live by skillfully harvesting and processing wild nuts and berries and by capturing the fish that crowded the streams. The acorn, leached of toxic acids and turned into meal, was a staple of the diet of most California native peoples. Indeed, the first English-speaking Europeans to encounter California Native Americans were so struck by their focus on gathering nuts from the ground and unearthing nutritious roots that they nicknamed them "Diggers, " and "Digger Indian" became a vague nickname for many of the groups.

An ample food supply, temperate climate, and absence of wars contributed to a large, healthy population. It has been estimated that when Europeans first came to California, the native population was probably close to 300, 000-13 percent of the indigenous peoples in North America.

Declaration of the Rights of Indigenous Peoples